More and more non-retirees see 401(k) and other retirement savings as a major source of retirement income going forward. In a recent survey done by Gallup, this number has risen to 50% of non-retirees surveyed, the highest the agency has reported since April 2008. 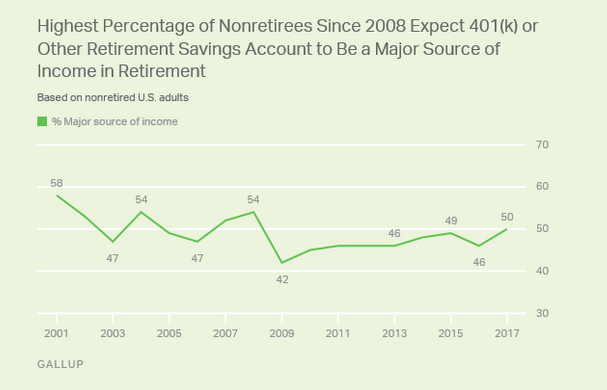 Not surprisingly, the significance of retirement account savings as a major source of income tends to trend with the strength of the stock market (you can follow the logic – as investment markets rise in value, so too do retirement account balances, which means more potential income; the opposite is also true).

However, while improved, non-retirees’ expectation that their retirement account will significantly fund their post-working years has not returned to where it was prior to the financial crises. The percentage expecting their 401(k), IRA, Keogh or other retirement account to be a major income source averaged about 52% in Gallup polling each April from 2001 through 2008. The highest point for this outlook was 58% in 2001, at the tail end of the dot-com boom.