Earlier this week I mentioned the good news that 401(k) balances are on the rise. While a rising market had a lot to do with the increasing balances, other positive strides were also seen in the fact that less people are borrowing from their retirement accounts and that contribution percentages were on the rise (in fact they were the highest they’ve been in 7 years).

In spite of moving in the right direction, it still may just not be enough. Which brings me to the real challenge for retirement security over the next decade: according to a new report from advisory firm Research Affiliates, the next 10 years will bring low single-digits when it comes to expected real returns (defined as gross return less inflation) for a “typical balanced portfolio.” In fact, their analysis projects that the odds of making even 5 percent on traditional investments over that time frame are slim. See excerpt for an article by Suzanne Woolley below.

I’m a firm believer in the phrase “forewarned is forearmed.” Whether or not the study’s projections come to fruition over the next 10 years, the key is to plan accordingly, and make adjustments now to accommodate the possibility. If you’re not yet retired, that means being more aggressive when it comes to savings. If you are retired, it means having the ability to be flexible when it comes to your spending needs so you account for real investment returns in the years to come.

The company looked at the default settings of 11 retirement calculators, robo-advisers, and surveys of institutional investors. Their average annualized long-term expected return? 6.2 percent. After 1.6 percent was shaved off to allow for a decade of inflation, the number dropped to 4.6 percent, which was rounded up. Voilà.

So on average we all expect a 5 percent; the report tells us we should start getting used to disappointment. To show how a mainstream stock and bond portfolio would do under Research Affiliates’ 10-year model, the report looks at the typical balanced portfolio of 60 percent stocks and 40 percent bonds. An example would be the $29.6 billion Vanguard Balanced Index Fund (VBINX). For the decade ended Sept. 30, VBINX had an average annual performance of 6.6 percent, and that’s before inflation. Over the next decade, according to the report, “the ubiquitous 60/40 U.S. portfolio has a 0% probability of achieving a 5% or greater annualized real return.” 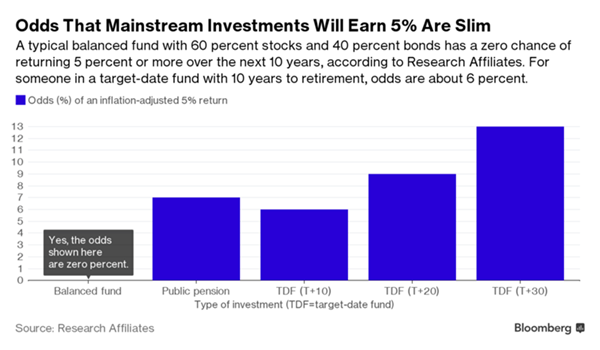 One message that John West, head of client strategies at Research Affiliates and a co-author of the report, hopes people will take away is that the high returns of the past came with a price: lower returns in the future.

Research Affiliates’ forecasts for the stock market rely on the cyclically adjusted price-earnings ratio, known as the CAPE or Shiller P/E. It looks at P/Es over 10 years, rather than one, to account for volatility and short-term considerations, among other things.

The firm’s website lets people enter their portfolio’s asset allocation into an interactive calculator and see what their own odds are, as well as how their portfolio might fare if invested in less-mainstream assets (which the company tends to specialize in). The point isn’t to steer people to higher risk, according to West. To get higher returns, you have to take on what the firm calls “maverick” risk, and that means holding a portfolio that can look very different from those of peers. “It’s hard to stick with being wrong and alone in the short term,” West said.

At least as hard though is seeing the level of return the calculator spits out for traditional asset classes. Splitting a portfolio evenly among U.S. large-cap equities, U.S. small-cap equities, emerging-market equities, short-term U.S. Treasuries, and a global core bond portfolio produced an expected return of 2.3 percent. Taking 20 percent out of short-term U.S. Treasuries and putting 10 percent of that into emerging-market currencies, and 10 percent into U.S. Treasury Inflation Protected Securities, lifted the return to 2.7 percent. Shifting the 20 percent U.S. large-cap chunk into 10 percent commodities and 10 percent high-yield pushed the expected return up to 2.9 percent. Not a pretty picture.

Moral of the story: Since most people’s risk tolerance isn’t likely to change dramatically, the amount you save may have to.