The Social Security Administration released its annual Cost of Living Adjustment (COLA) for benefits this past Tuesday. The good news is there is actually an adjustment this year, unlike in 3 of the past 7 years; the not-so-good news is that the raise was a paltry 0.3% (roughly $4 more per month for the average benefit of $1,360). 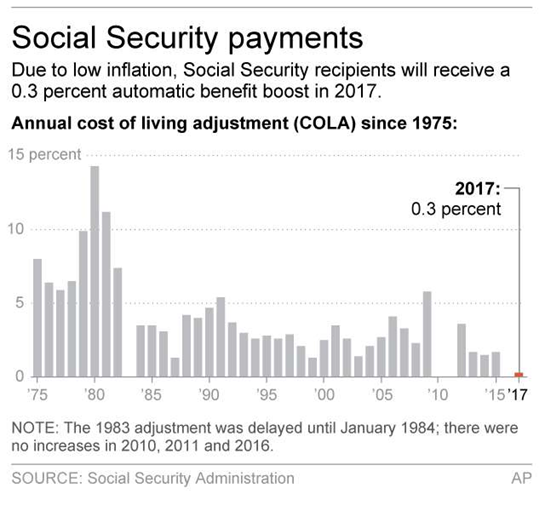 For seniors who are feeling the pinch of higher prescription drug costs and other expenses, this won’t bring any added relief. In fact they probably won’t even see the increase, as the raise will most likely be eaten up by an increase in their Medicare Part B premium, which is usually deducted from Social Security payments. By law, increases in premiums for most Medicare recipients cannot exceed their Social Security COLA. That’s known as the “hold harmless” provision, and it protects the majority of Medicare recipients.

However, new enrollees and high-income retirees are not covered by the hold harmless provision, so they could face higher Medicare premiums. Those premiums will be announced later this year.

In related news, the Social Security Administration also announced an increase in the maximum earnings subject to the Social Security tax to $127,200 from $118,500, beginning in January 2017. Any part of a worker’s salary above the threshold is not taxed for Social Security. As such, it’s a regressive tax hitting lower-income workers harder in percentage terms, although this rule change will make it slightly less so.

Raising this threshold had long been cited as one of the possible fixes to help the solvency of the federal program. Other options included increasing the tax rate and raising the full retirement age.