It’s been a while since inflation was a big part of American life. It has been so low recently that Social Security payments were not increased in 3 of the last 6 years, and the Federal Reserve has even raised the possibility of negative interest rates.

Yet inflation has not disappeared, and for retirees, even low inflation can have an outsized effect on their finances, according to recent research by the Limra Secure Retirement Institute. At the Federal Reserve’s target rate of 2 percent, inflation could erode more than $73,000 of a retiree’s purchasing power over 20 years if that person were receiving the monthly average Social Security retirement payment of $1,341. At 3 percent, purchasing power would shrink by more than $117,000. 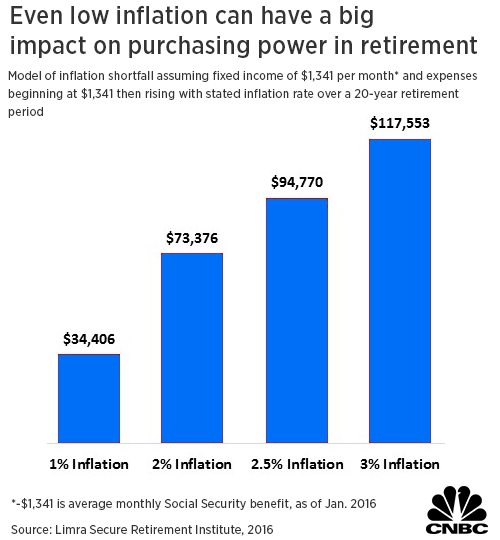 Inflation hits retirement savings particularly hard because those no longer working often spend more money on categories where prices are rising faster, like health care. Health spending per person for those over age 65 was more than $18,000 in 2010, triple what working-age people spent, according to a December report by the Centers for Medicare and Medicaid Services.

Social Security’s Cost-of-Living Adjustment (COLA) was designed to provide an annual increase in benefits to help stave off the effects of inflation on a retiree’s often fixed income, but it does not always do so. The COLA is based on the Consumer Price Index (CPI) which measures the spending of all Americans. In the course of a year, if spending increases for retirees but not for all Americans and the result is a level CPI, then no COLA will be paid to retirees who receive Social Security benefits (which is exactly what happened in 2010, 2011 and 2016).

Bottom line, pre-retirees and retirees must account for the impact of inflation – and all the other risks they may face in retirement – and develop a formal written plan that mitigates these risks and helps them achieve their financial goals.