It’s a common goal among parents: in order to provide a more solid financial footing for their child after college, they spare him or her from going deeply into debt by footing the bill. The price is not cheap even to send one child to college (see table below for average costs of public in-state, public out-of-state and private college expenses); imagine if you had multiple kids – your expenses would run into the hundreds of thousands! Consequently, college planning is something with huge financial implications, and decisions should not be made lightly.

The issue with parents’ willingness to foot the entire bill is this – from a purely financial sense, education is unlike a home or a potentially profitable business because college expenses permanently leave your asset base. While the personal pleasure of watching one’s children achieve academic and career success is incredibly satisfying, this is an intangible gain, and most parents don’t expect a monetary return on the “investment.” Furthermore, for that intangible gain, there’s a real cost.

Now, by no means are we advocating that parents not support their children in pursuit of higher education. However, they do need to realize what impact school choice can make to their own future retirement security. Let’s look at a sample family with two children, who are two years apart in age.

From the table, it is clear that the cost of tuition for a private college is double what you can expect to pay for a public in-state school, with a narrower spread between the two public options. Imagine our family chooses to send both of their children to private colleges or universities. Using the averages provided, each child’s total cost (assuming a year to year annual average 6 percent tuition inflation rate) for four years at a private college or university is $215,756. Over the six years, noting two overlapping years, the actual out-of-pocket cost is approximately $458,180. If those same children both opted to attend public in-state colleges or universities, the total cost would be $228,625, which is a difference of $229,254—a significant cost savings. But what is the “real” cost?

Using our example, parents will look at the “gross cost” difference of $229,254 and may or may not be troubled by that variance. However, we live in the world of compound growth. The “real” cost to the family isn’t ascertained by simple subtraction, but is actually determined by the loss of future wealth. What would happen if we evaluated the cost differential in terms of potential retirement savings? If we took the $229,254, retained that money in the family’s assets and grew it at an investment rate of 6 percent per year for the next 30 years, the future value would be $1,318,443. That number is significant enough that even high-net-worth families will care, and would go a long way to securing your retirement.

As the graph below illustrates, choice of college has a huge opportunity cost for parents funding college expenses out of their own pockets. Tuition savings (and subsequent growth of that savings) realized by attending a public in-state option would translate to significant retirement savings increases (in this example, the least amount added to the portfolio would be ~$815K, still nothing to sneeze at). 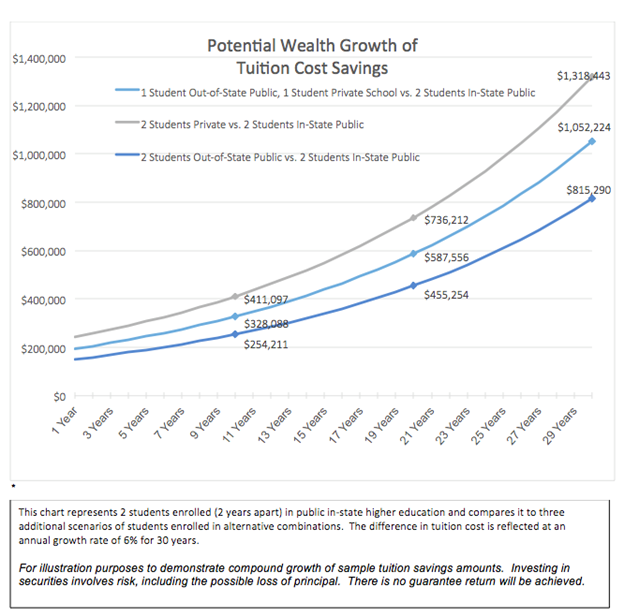 Many parents look at an issue like college planning in a simplistic way and never fully appreciate the future implications of their choices. My goal with this post is to point out the very real cost (or loss of potential future value) to college funding, so at least families can make a more informed decision. Moreover, perhaps understanding the real cost of selecting a college will encourage parents to plan earlier and use more of their income to contribute to dedicated college funding, or even place some responsibility on their children to contribute to their education.