Data from Fidelity Investments shows that the average balance of 401(k) accounts broke records after increasing to $99,900 in the third quarter. The average balance of IRAs also jumped to a record-high of $103,500 during the same period, says Fidelity. Both figures represent a 10% increase from year-ago levels, while the percentage of families with retirement accounts increased to 52.1% last year from 49.2% in 2013. 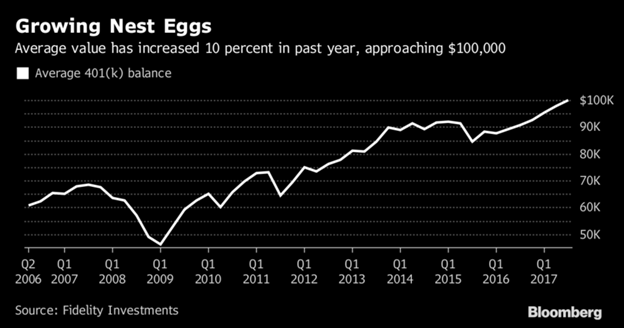 On the other hand, the average retirement account balances remain woefully low when considering the future income needs of retirees, especially as the burden of producing that income continues to shift to the individual’s shoulder. Using the old 4% “safe withdrawal rate “rule, consider that a balance of $100,000 would only produce $4,000 of annual income! So while it is heartening to see the uptrend in retirement savings, it is clear that more work needs to be done.