A report from the Bureau of Labor Statistics indicates that retirees in the 75-above bracket incur an average of $36,673 in expenses annually. More than half of this amount goes to housing ($13,375) and health care ($5,708), the report says. 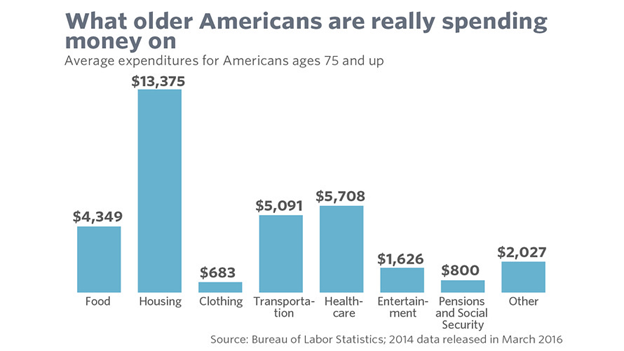 There may be a common misconception that people will have their homes paid off by the time they retire; in fact, nearly one in five people ages 75 and up still has mortgage debt, according to government data. Still many others rent their home. Add to the cost of a roof over your head other household expenses, including utilities, insurance and maintenance, and it all adds up to a retiree’s largest expense by far.

When it comes to healthcare, Medicare is an important part of most retirees’ health care plans, although there are some things it does not cover, such as eyeglasses, hearing aids and dental care. Here is a rundown from U.S. News & World Report of the costs that retirees should expect in retirement, including premiums and deductibles (which explains why it is second only to housing as a cost in retirement):