Some food for thought from the latest Fidelity Investments retirement research survey. The latest report summarizes their findings when asking people to assess their own retirement readiness. What may surprise you is that for many a readiness to retire has less to do with having enough money to do so.

The graphic below illustrates a few myths countered by what the survey found in reality most people think about retirement. The key takeaway of the entire survey for me is that while being financially prepared is key, equally as important is making sure you’re ready mentally as well. What do want your retirement to look like? And if you’re sharing that time with your spouse, do you have similar ideas about your retirement? Formulating answers to such questions is just as integral to your well-being in retirement as running the numbers. 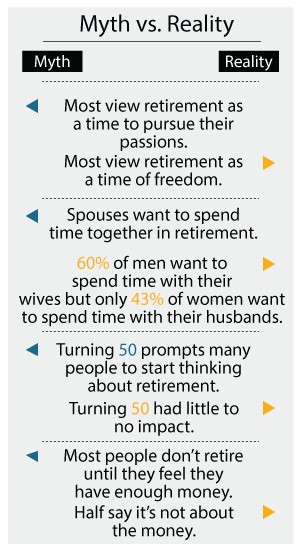 When will you be ready to retire? Particularly if retirement is still far away, you’re probably thinking in terms of dollars—how many you will have and how long they will last. But new research finds that for many people, the decision to retire is not just about money. It’s about life, and the freedom to enjoy it.

That’s the conclusion of an extensive survey of 9,372 pre-retirees, 2,293 retirees, and 451 people who never plan to retire, conducted by Fidelity Investments in collaboration with the Stanford Center on Longevity and Greenwald & Associates in August 2015. The survey only included respondents who believed they had some control over if and when they would stop working full-time.

While financial and work-related factors are the primary reasons people continue to work, with eligibility for Medicare and Social Security as key factors, the survey also finds that it’s often nonfinancial factors like family, health, and lifestyle that ultimately cause people to pull the trigger to retire. Among retirees, 72% chose leisure as a very or somewhat strong reason to retire: 64% pointed to stress at work and 62% cited a desire to spend more time with grandchildren.

“There seems to be a values shift as people near retirement,” says Stanford’s Steve Vernon. “Even if they haven’t reached their retirement goal in dollar terms, many seem to desire freedom over money.” Some 80% of both pre-retirees and recent retirees in Fidelity’s survey view retirement as a new stage of life. Most say they look forward to the freedom that retirement brings. Says Vernon, “It’s the first time many can actually breathe and live life.”