Sharing a “food for thought” article from Kiplinger regarding the potential advantage new lower marginal tax rates offer for Roth conversions. With the creation of a lower 24% marginal rate (and the expansion of the income range covered under this bracket), those people who used to be in the old 25% bracket now have the ability to “fill their bracket” and pay less in tax for a conversion than just even last year. It certainly appears that the change in tax laws may actually have created a little boon for those looking to diversify their retirement income sources.

In case you haven’t heard — taxes are on sale! To take advantage of that, it means that 2018 could be the year for you to consider converting a traditional IRA into a Roth.

But first, some background. Thanks to the 2017 Tax Cuts and Jobs Act, nearly all Americans will benefit from reduced tax rates and an expansion of the amount of income subject to those newly reduced rates, due to broader tax brackets.

Most workers will start seeing bigger paychecks, because a smaller portion is being withheld by Uncle Sam. Many retirees will also benefit from reduced withholdings on retirement account distributions, lower estimated tax payments or potentially a bigger refund when they file their 2018 tax returns.

Throughout this article, I’ll explain how you can take advantage of these tax rate and bracket changes to minimize your federal tax liability.

Not All Rate Reductions and Bracket Expansions Are Created Equal 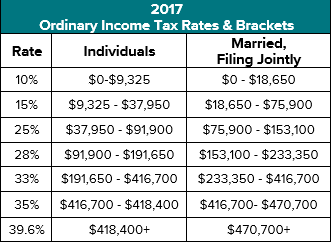 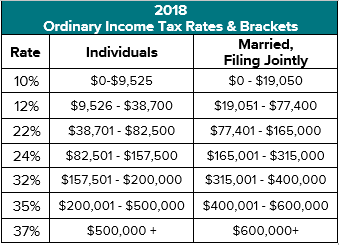 As the tables above illustrate, the benefit of new tax rates and brackets is dependent on your filing status and total income. For example, married couples in the old 15% bracket benefit from a reduced tax rate down to 12%, but the tax bracket only expanded $1,500 to cover income up to $77,400.

On the other hand, married taxpayers who were in the 25% tax bracket are presented with bigger potential benefits. The 25% tax rate was reduced to 22%, and the bracket expanded almost $12,000 to cover income up to $165,000. The larger opportunity, however, was the change to the new 24% tax bracket, which applies to income up to $315,000. Compared to 2017, a married couple previously comfortable paying tax at 25% could now potentially realize over $160,000 in additional in income that is taxed at the new lower 24% tax rate.

For single taxpayers, similar rate reductions and bracket expansions improved the old 15% and 25% brackets. Compared to 2017, a single individual previously comfortable paying tax at 25% could now potentially realize an additional $65,600 can be realized at the new 24% rate.

The goal of good tax planning is to pay as little tax as possible over your lifetime by maximizing income when tax rates are low and minimizing income when tax rates are high. If your current marginal tax rate (the rate that applies to the next additional dollar of income) is more than your expected future rate, filling your brackets is a bust since you would pay more today than you otherwise would in future.

If your current marginal tax rate is less than your expected future marginal rate, however, then realizing additional income now by filling up your brackets may be beneficial. Future tax rates often increase for taxpayers for a number of reasons, including:

In my practice in the past, I’ve found that it has often been beneficial for many taxpayers to pay tax at the old 15% rate, and for others up to the old 25% tax rate. Realizing income in excess of the old 25% rate was often confusing to evaluate, because the Alternative Minimum Tax (AMT) often applied, and the real marginal rate was anywhere from 26%-35%.

Under the new tax laws, the decision to realize additional income is simpler and more advantageous, especially since the AMT no longer applies in most circumstances. That, coupled with lower rates and expanded brackets, can make tax planning more lucrative.

For many households, filling up the new 12% bracket will continue to be a “no-brainer,” although the calculation can be complicated when determining the taxability of any Social Security and qualifying for the 0% preferred tax rate on qualified dividends and long-term capital gains. Filling up the new 24% bracket, however, may provide a substantial opportunity, especially for those who were previously comfortable paying 25%.

Roth Conversions Could Help You to Win Your Bracket

For many workers and retirees, the easiest way to realize additional income to fill up your tax bracket is to use what is likely one of your largest assets: your tax-deferred traditional IRA account. Distributions from this account type create taxable income, but there’s a smarter solution that just taking the distributions. Instead, you can convert all or a portion of the account into a Roth IRA. Doing so will create additional income and a tax bill, but the investments in the Roth IRA will now benefit from tax-free growth and no tax when properly distributed. Roth conversions are generally beneficial when the resulting tax can be paid from assets other than a tax-deferred retirement account.

Let’s take a look at an example with Dave and June, both 65. In 2017 they were in the 25% tax bracket and anticipated that their RMD, once they reached age 70.5, would put them in the 33% tax bracket. In this case, they decided and were comfortable filling up the 25% tax bracket, which, in their case, required a $33,000 Roth IRA conversion.

Under the new tax laws in 2018, however, their situation has changed significantly. In this case, they are already in the new 24% bracket and anticipate that RMDs would almost put them in the 32% tax bracket and certainly the 35% when the first spouse passes. To avoid hitting those higher rates, they decide to fill up the 24% tax bracket, which means they could realize taxable income up to $315,000. As such, they anticipate completing a $195,000 Roth IRA conversion: $162,000 more than what was advantageous in 2017.

Sales are exciting because they offer “a deal” and don’t last forever. And that’s certainly the case with the recent tax law changes. Under the current law, this sale will end on Dec. 31, 2025, at which point tax rates will automatically increase back to the 2017 rates unless a future Congress extends the current structure. Consequently, there’s never been a better time to max your brackets and minimize the negative impact that taxes can play in the pursuit of your broader financial goals.

This information is not intended to be a substitute for specific individualized tax advice. I suggest that you discuss tax strategies with a qualified tax adviser to see if these strategies makes sense for your unique situation and consider the following questions: