With tax time fast approaching, I often encounter confusion about what can and cannot be done with traditional IRAs and defined contribution [DC] plans in different scenarios. So, here are some pointers that might help you juggle the two.

The traditional individual retirement account (IRA) was created in 1974 through the passage of Employee Retirement Income Security Act (ERISA) thus making traditional IRAs the oldest and most common type of IRA. In mid-2017, for example, 35.1 million (27.8%) U.S. households owned traditional IRAs, according to the Investment Company Institute.

Traditional IRA rules, including eligibility, have changed through their 40-plus-year history. Originally, they could accept annual contributions not exceeding the lesser of $1,500 or 15% of earned income—but only from employees who were not covered by an employer’s qualified plan. Then, in 1981, Congress loosened the rules to let anyone deduct an IRA contribution, whether covered by an employer plan or not and increased the contribution limit to $2,000. The deductibility rules were tightened in by the Tax Reform Act of 1986, while also creating nondeductible (after-tax) contributions for the first time.

Each tax year, an eligible investor may contribute up to a certain limit, which, for both 2017 and 2018 is $5,500, plus $1,000 catch-up for those investors age 50-plus. The aforementioned limits are in addition to employer plan salary deferrals (e.g., 401(k), 403(b), 457, and SIMPLE IRA), if any. In addition, tax law allows taxpayers to fund their IRAs for the prior tax year until their tax-filing deadline.

By way of example, a taxpayer can make a 2017 IRA contribution until April 17, 2018 (due to the fact that the regular date of April 15 falls on a Sunday this year, and on the following business day, Monday, April 16, Emancipation Day is being observed in Washington, D.C.)

When is an individual considered an “active participant” in an employer-sponsored plan for determining IRA deductibility? What kinds of plans are considered employer-sponsored plans? Before exploring those questions, it should be noted that the IRS phrase “covered by a retirement plan” may be synonymous with active participant for determining traditional IRA deductibility.

An active participant in an employer-sponsored retirement plan is generally considered an individual who receives a contribution under a defined contribution (DC) plan, or is not excluded from participation from a defined benefit plan. For this purpose, DC plans include SEP, SIMPLE, and SAR SEP; 403(b); certain government plans; 401(k)s; profit sharing; stock bonus; money purchase; ESOP; and target benefit plans. The final determination of whether individuals are deemed active participants depends on the type of plan sponsored by their employer.

Generally, if on your W-2 form you check box 13 “Retirement Plan,” you will be considered an active participant for the purpose of making a deductible IRA contribution. The IRS also cautions that special limits may apply to the amount of traditional IRA contributions you may deduct. 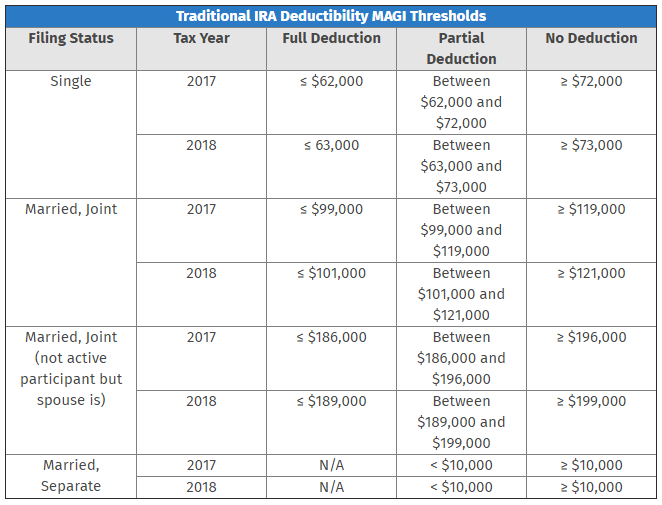 The table below outlines more specifics for determining active participation.