Last week, the Social Security Administration announced a 2 percent bump in Social Security benefits next year, the largest raise for retirees since 2012 (remember last year’s increase was a mere 0.3 percent and the year before that there was no adjustment imputed). 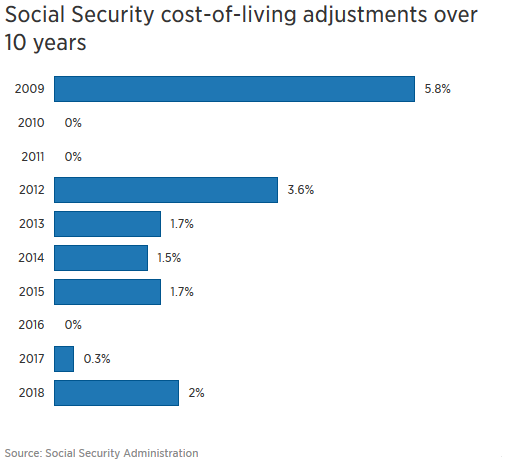 The annual cost-of-living increase is determined by taking the average rate of inflation from the third quarter of one year to the next, using the Bureau of Labor Statistics’ broad measure of prices for food, housing, clothing, transportation, energy, medical care, recreation and education.

With inflation low throughout the economic recovery, adjustments have been slight or non-existent. The 2 percent gain translates into an approximate $27-a-month increase for all retired workers, from $1,377 to $1,404.

Clearly no major windfall, another problem is that the extra money could get eaten up by Medicare premiums for about 70 percent of retirees.

Here’s why: The so-called “hold harmless” legal provision has protected the majority of retirees from increased Medicare Part B premiums the past couple of years. Since the cost of living adjustments were not enough to cover the increase in monthly Part B premium (which would have actually reduced their Social Security benefits), retirees did not see a bump in cost. The “hold harmless” provision affects people whose premiums are deducted from their monthly Social Security check. (Note: New Medicare enrollees are not protected by the provision.)

Premiums for Part B, which primarily covers doctors’ visits and other outpatient care, can change annually, as it is expected to fund about 25 percent of the program’s annual expected per-beneficiary spending. For 2017 the premium was $134, with higher earners paying more.

Yet because of the hold harmless provision, the actual amount paid by most Medicare recipients is about $109 monthly.

So if Part B premiums don’t rise in 2018, the average retiree will see that extra $27 go mostly toward paying the difference between what they are paying now ($109) and the current Part B cost ($134).

Their Social Security won’t be reduced, but Part B would take nearly every penny of their COLA.

The mid-year Medicare trustees report projects premiums to remain at $134 in 2018 and 2019, although that could change. Exactly when the government will announce its 2018 Part B premiums this year is uncertain, as it varies under different administrations.

The government also announced that it will increase the maximum amount of earnings subject to the Social Security tax to $128,700 from $127,200, starting in January.

Furthermore, for those receiving Social Security benefits while still working, the earnings limit for workers who are younger than “full” retirement age (age 66 for people born in 1943 through 1954) will increase to $17,040. (The Social Security Administration deducts $1 from benefits for each $2 earned over $17,040.)

There is no limit on earnings for workers who are “full” retirement age or older for the entire year.