“If I had a million dollars, I’d be rich!” or so the lyric from the Barenaked Ladies song proclaims. But a $1 million is not the sum it used to be.

A new report from GOBankingRates measures how long a million dollars would last for retirees 65 and older, state by state. It did this by multiplying the Bureau of Labor Statistics’ mean annual expenditures for that age group by a cost-of-living measure for each state, provided by the Missouri Economic Research and Information Center. The tally separated out annual spending on health care, housing, groceries, transportation, and utilities.

The upshot: If you want to stretch your dollars as far as they can go, you need to head down south. Mississippi tops the list as the state where your $1 million will last the longest, at 26.3 years, followed by Arkansas, Oklahoma, Michigan, Tennessee, Georgia, Missouri, Texas, Indiana and Alabama in the top ten. 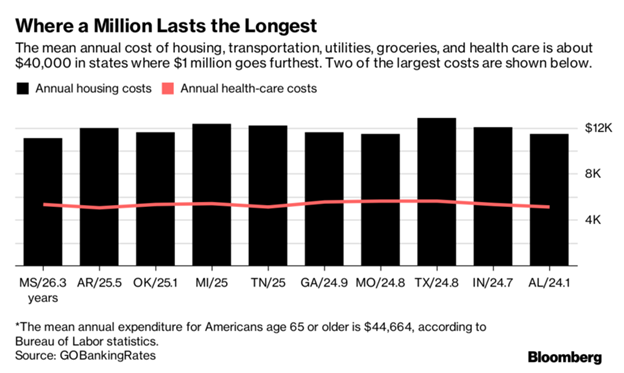 The flipside – where your $1 million takes the least time to burn through – unsurprisingly contains states that are consistently in the top ten of most expensive to live in, with Hawaii being the most expensive ($1 million only lasts 11.9 years). California (my home state, and notoriously not retirement friendly by most metrics), Alaska, New York, Massachusetts, Connecticut, Maryland, Oregon, Rhode Island and New Jersey round out the top ten states where $1 million lasts the shortest amount of time. 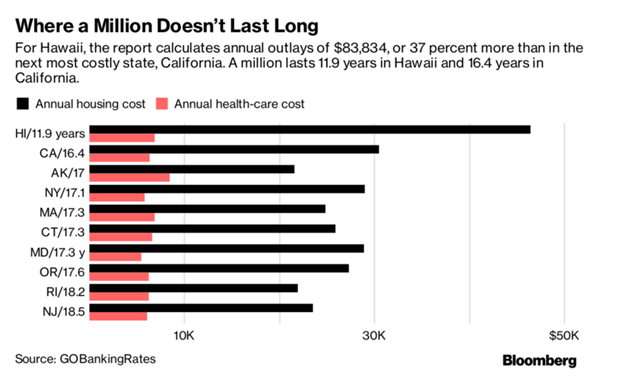 Something to note – these are conservative figures. They don’t factor in any entertainment or travel, which would make for a pretty grim retirement. Nor do they take into account how inflation might cut into purchasing power as we age. Inflation can take a bigger bite for seniors, because medical costs, which may account for a bigger chunk of expenses, have an inflation rate significantly higher than that for the broad economy.

The annual expenditure numbers also don’t factor in any return on the pot of money seniors are presumably holding while they live in retirement. Gains there could offset purchasing power lost to inflation.

Still, the data are useful in starting to map the relative power of a fixed sum of savings from one state to another.

For many people, the idea of a million-dollar pot of savings for retirement is a dream. Many survive on less. For others, a million won’t be nearly enough to fund the kind of lifestyle they want when they’re older. It all boils down to your aims—and whether health issues throw you a curve.

Rather than be paralyzed by big numbers, retirees-to-be ought to focus on tracking the smaller amounts they’re spending today. Getting a grip on your budget and on the basic tenets of investing now is an important first step in figuring out how much you’ll need down the line.